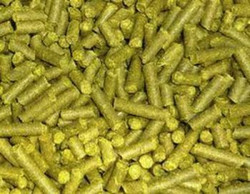 SKU:
UPC:
Bulk Pricing:
Buy in bulk and save

One brewer has used it in a single hop lager beer, which he described as "clean and crisp with a refreshing sweet lemon character". Meridian has also raised eyebrows in a wide range of ales, from pales to dark roasted malt "winter seasonal.  It's reported to play well with Belgian yeast and has a way of amplifying the zesty zing of weissbiers.